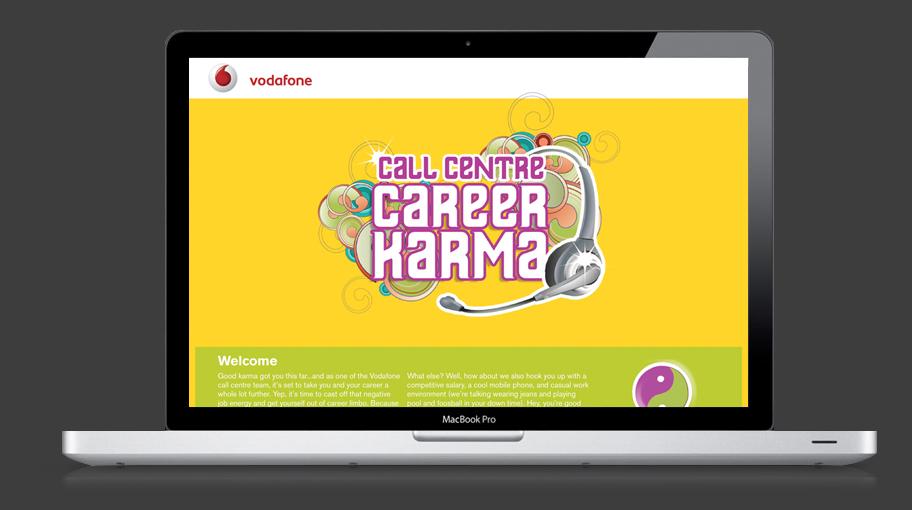 De-centralisation of their International Contact Centre necessitated a new team in New Zealand. A result of political unrest, the move was sudden so rapid deployment and generation of large scale interest was required.

Vodafone saw this as an opportunity to offer the market a new perspective on working for Vodafone and to attract a new breed of candidate. And with benefits aplenty there was lots to work with.

Vodafone’s environment is a cut above the average call centre and the organisation provides a genuine career path for their employees. With a solid training program in place, members of the Contact Centre team who work hard and do well can really go places within the organisation.

The notion that you get back what you put in at Vodafone guided the creative concept for this campaign – Career Karma. The campaign compliments hard working, competent Customer Service Representatives, telling them that they deserve better conditions, more respect and support.

The multichannel campaign harnessed a wide range of communication channels including radio, social media, online advertising, and a postcard for existing Vodafone employees to give to their friends. The combination of radio and social media was a clever use of a limited media budget, ensuring a broad reach as well as the ability to target specific demographics. Each channel directed candidates to a campaign site with the memorable URL, karmacalling.co.nz

The art direction was fun and bright, a departure from the standard recruitment ad style Vodafone has used in recent years. On radio we achieved cut-through with the use of a sitar which, not typical for NZ radio, captured the attention of listeners and drove them to the landing page. The aim was to stand out and show a different face to Vodafone, and that’s exactly what was achieved with this colourful execution.

Vodafone were blown away by the response. Over 600 applications were received as a result of the campaign. This was over double the number received during a typical intake and the high standard of applicant saw Vodafone hire 90 new staff in just two weeks.

The campaign not only exceeded expectations, the creative execution and the use of referral cards created excitement internally and ensured current employees got behind the campaign.